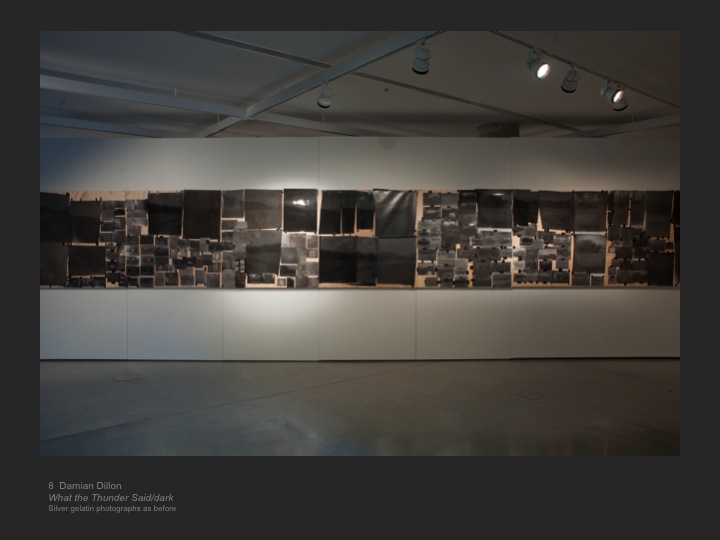 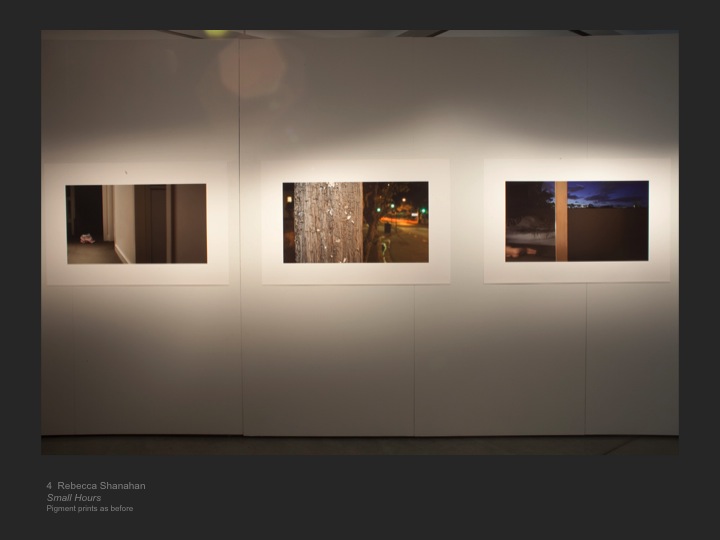 Questioning the artificiality of the American Dream which manifests itself in excessive materialism and fetishization of “lifestyle” in the form of house porn and suburban conformity – it is quite telling that one of the most beautiful moments in the movie American Beauty(1999) was of a footage taken by one of the characters of a white plastic bag dancing in the wind. Cheap, throwaway and unadorned it worked as a foil against the manufactured tastefulness that Annette Benning’s character, a real estate agent, worked so hard to create and demanded from her family. Shanahan and Dillon’s work in Homelands exhibited at UTS Gallery on June 12 to July 20 under the moniker Interzone, likewise taps into this narrative of suburban living that is punctured by disquiet and anxiety. The gallery was divided in the middle and presented Shanahan on the far side, with colour photographs of interiors, documenting a family’s quiet moments for a series called Small Hours. While Dillon’s section, closer to the entrance, presented a series of deliberately badly printed black and white photographs, of mostly down and out exteriors for a series called What the Thunder Said. 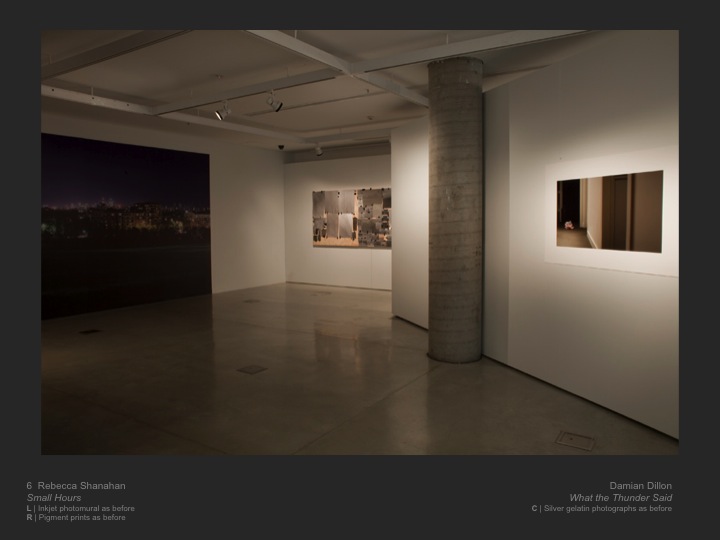 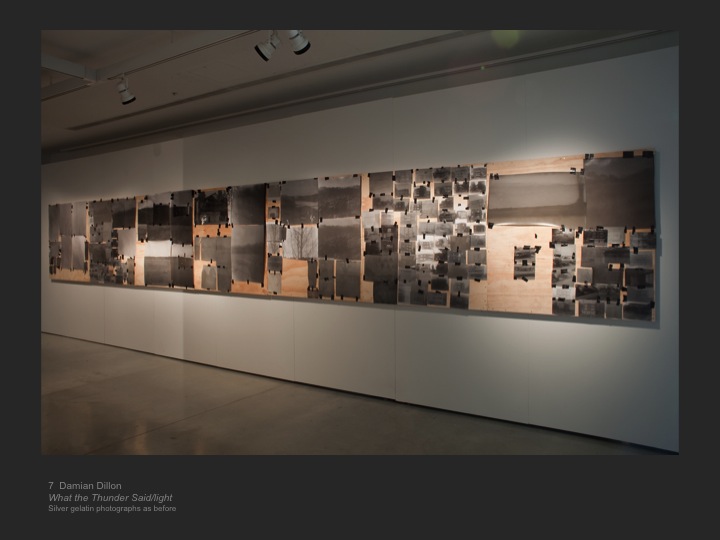 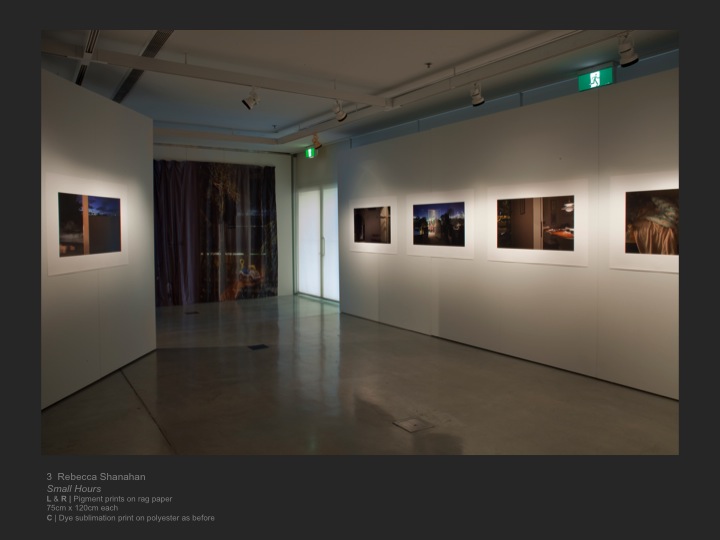 Taking its title from the fifth section of The Wasteland by T.S. E Elliot (“These fragments I have shored against my ruins”), Dillon focused on abandoned cars in various states of brokenness, nondescript apartment blocks and half-built houses with its wooden frames exposed to the elements. There are fragments of rail tracks, guns and bullets, porn (ripped from magazines and pinned on the fridge), newspaper articles of criminals on the loose, household junk and abandoned car wreckages in a car yard. Most are over and under-exposed and many are torn and blemished by dusts, scratches and fingerprint marks. Like Miroslav Tischy’s output, Dillon’s prints are riddled with imperfections and are probably not archivally sound either. However like the plastic bag dancing in the wind it also has a strange appeal for not being too precious. Unlike Shanahan’s digital photos which have been carefully arranged in a sequence on the wall like a film sequence or storyboard, Dillon’s old school analogue prints were haphazardly taped over a naked plywood board, which ran the length of two walls. At its simplest the two works sits in dialectical relationship to each other – disorder versus order, outside versus inside, danger versus safety, the small hours versus the interminably long amidst the ruins of everyday life.

Gaston Bachelard once wrote that the most valuable aspect of home was that ‘it allowed one to dream in peace’ and yet it is the nightmarish qualities of home or lack of it which seems to drive many contemporary artists to produce work. In Someone Else’s Here currently showing at ATVP Gallery in Newtown until August 19, Alex Wisser presents a series of photographs, an installation made out of household junk and 4 performance pieces documented on video and filmed at various locations in Sydney. The photographs comes in three parts – interior shots of houses being sold at auction (nothing grand and mostly just neatly shabby), interior shots of houses in rural NSW and exterior shots of an abandoned brick work and cement factory in Kandos, NSW. The odd title which sounds grammatically awkward seems to point to a person having a disembodied experience, like being a stand-in for a present which is not his.

The performance videos documents Wisser simply staring at the camera whilst standing still, as he tries to hold a brick from his outstretched arms for an hour. He replicates this act 4 times in 4 different locations all over Sydney (Redfern, Strathfield, Cabramatta and Blacktown) to various comic and dismissive reactions from random passersby. Shaking and grimacing badly towards the end in an effort to do so, it has an absurd quality to it, similar to that of watching a person push a boulder up a mountain only to have it roll down, again and again. Except the artist here is doing even less, he is simply hanging on to a brick, a minimal action at best – and yet the strain and effort needed to do so for an hour, pushes his physical capacities over the edge. A test of mental and physical endurance, the work seemed like a primal metaphor for those who have chosen to live lives of creative poverty in one of the most expensive real estate cities in the world, or for the lives of the many thousand Sydney-siders who struggle with housing stress week in and week out. It brings to mind another film, Fellini’s Amarcord, in which a brick-maker named Mortar pens a poem called Bricks. It goes, “My grandfather made bricks/My father made bricks/I make bricks too/But where’s my house?”